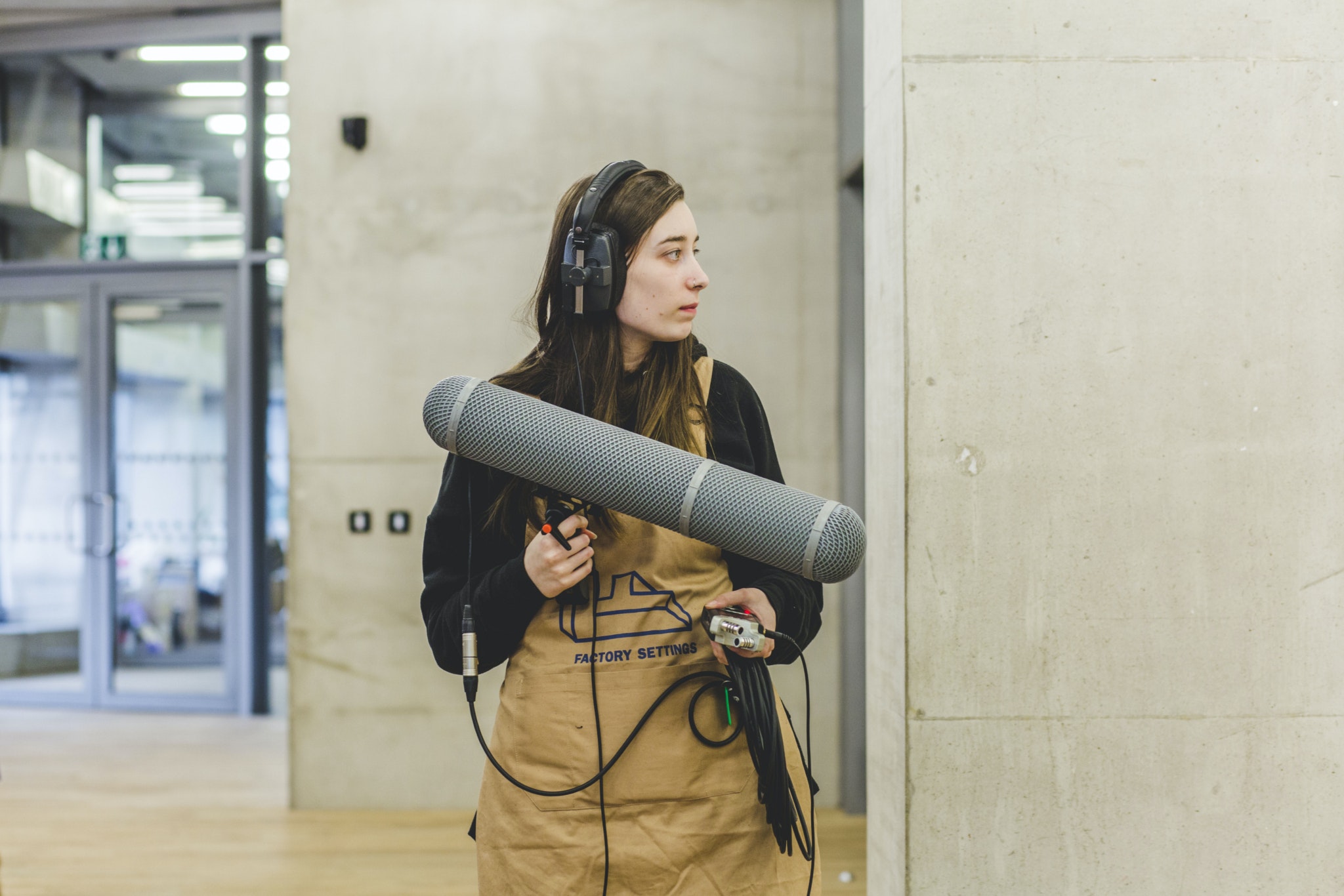 Friday, 19 November, 2021 — New to Plymouth College of Art, BA (Hons) Sound Arts is a practical studio course to explore sound in all its forms as creative artistic expression. To help you to understand more about Sound Arts, we sat down with Lecturer Neil Rose, who’ll be taking a leading role for the course.

New to Plymouth College of Art, BA (Hons) Sound Arts is a practical studio course to explore sound in all its forms as creative artistic expression. Launching next year as part of our School of Arts + Media, we’re currently recruiting students to start in September 2022.

To help you to understand more about how Sound Arts will immerse students in the cultural evolution of sound and its use as a creative medium, while giving students the tools and skills to develop an understanding of the objects, software and live aspects of making and performing, we sat down with Lecturer Neil Rose, who’ll be taking a leading role for the course.

Situated within an arts and media practice, with natural affinities to fine art and film, BA (Hons) Sound Arts places an emphasis on experimentation, for students to immerse themselves in all aspects of sound; including listening, field recording, editing, playing, exhibiting, composing and performing.

How did you get started as a sound artist?

I was always creative, but when I was younger I didn't know where to put that creativity. Growing up as a teenager in the 1990s, the resurgence of electronic music that I heard in clubs made me interested in making music of my own. I started in an abstract way, by using whatever equipment I could get my hands on. I was working on an Amiga 500 for a while, programming in hexadecimal code. There’s something beautiful about working with a free platform that doesn’t limit the things that you can do with it.

At first I thought I was making techno, but the sounds that I was creating sounded less and less like the German techno that I loved. I’d send demos out widely and there were a couple of people who would reply encouragingly, which kept me going, until a friend of mine started a Fine Art course at Middlesex University and told me that they had a BA (Hons) Sonic Arts course there, where it felt like I would fit in. I quit my PR job and studied Sonic Arts from 2000 to 2003, becoming an electro-acoustic composer.

How did you feel when you started formally studying sound in a creative way?

I loved it. They had a rule where there was one analogue and one digital studio, but you weren’t allowed to work in digital until you’d physically cut your first tape. That was where I learned to play and have fun in creative ways. I understand now that people will continue to do things in the same way unless we experiment and break things, which helps us to develop new ways of solving problems.

Armed with those new ideas, I found my way to Plymouth and eventually started teaching on creative courses at Plymouth College of Art, alongside my personal practice. To this day, electro acoustic music underpins everything that I do. That period of experimentation gave me the technical skills and the philosophical understanding of how sound works.

Did your studies in sound have an impact on your professional career in other ways?

Absolutely. Since then I’ve worked on sound design for multiple films, released an album and worked with countless contemporary artists. I’ve been working with artist Tom Marshman for at least ten years, including on a project called Move Over Darling, where we’d interview members of the LGBTQ+ community who were over the age of 60, anonymise their stories and edit them together to create these incredibly powerful audio testimonies of lives that might otherwise not have been captured.

I’ve worked a lot of times with Low Profile, a Plymouth-based artist collective. Drumroll (2020) was a great project, an audio artwork made in collaboration with military drummer Richard Sharp, composed for eight drums and distributed online on New Years Eve as a shared, but distant, listening event. Recording and mixing this incredible feat of human endeavour, in the end result you can really hear the physicality of it, creating a texture that you can almost hear voices in.

Impromptu was another great one, a layered sound and light work made up of specially commissioned recordings of renowned Freddie Mercury tribute act Gary Mullen, performing a score inspired by the late Queen frontman’s extensive vocal improvisation games of audience ‘call-and-response’.

There are so many examples that I could give, but the point is that discovering a degree covering similar themes to BA (Hons) Sound Arts changed the course of my life, for the better.

Based on your experience, do you think there are a lot of platforms waiting for Sound Arts graduates?

The possibilities are endless. There has never been a point in history when there has been a greater demand for high-quality sound design, across the full range of television, radio, film and immersive theatre to art galleries and public spaces, live performances, gaming and everything in between. Sound Arts is a future-facing course uniquely designed to equip students with the practical skills and creative approach to succeed in any one of those fields.

BA (Hons) Sound Arts is about listening in a trained way to understand how sound works, alongside developing the skills to use sound to realise your ideas. So many of the experimental musicians and composers that started their careers by experimenting in the same ways that our Sound Arts students will, are now in heavy demand scoring blockbuster films. Just look at Portishead’s Geoff Barrow and Ben Salisbury’s sonic work on dystopian sci-fis like ‘Black Mirror’ and ‘Ex Machina’. Or Trent Reznor and Atticus Ross, whose dense early industrial sounds in Nine Inch Nails have led to them becoming possibly the most sought-after composers of film and television soundtracks today!

So you don’t think that Sound Arts is a niche subject?

Definitely not. Studying Sound Arts isn’t about creating a cohort of composers who are working on inaccessible sonic experiments, it’s about offering a home to people who have the creativity and drive to experiment with sound, and helping them to find practical applications and career paths to suit their talents. Talents that are in incredibly high demand, even if there is a scarcity of undergraduate courses in the UK catering to this area.

Think for a moment about sound design. There’s a common misconception about what the role of a Sound Designer means. Within popular filmmaking, a Sound Designer is likely to be a departmental head, overseeing the creative aspects of sound within a film production. The Sound Designer needs to know how to realise a creative idea with the technology available and then to instruct their team how to put that idea into practice. A conventional music education only gives you the tools to play the instruments on offer, not to lead on the creation of a new type of sound design that has never existed before.

Are there other potential career outcomes for graduates who want to find work outside of the film industry?

Even if we’re only talking about one (of many!) potential job title, even the role of a Sound Designer isn’t limited to working in film. We’re living in an age when we’re immersed in media 24 hours a day, on our phones, our laptops, the digital advertising billboards we pass in the street. Then at night we sit down to play games to relax and games can be so incredibly cinematic. Invada Records, which was set up by Portishead’s Geoff Barrow (there’s that name again!), sells TV and film scores on vinyl alongside soundtracks for games like Red Dead Redemption 2. The popularity of these soundtracks is testament to the market that’s waiting for BA (Hons) Sound Arts graduates.

So you’re saying that Sound Arts skills are in demand across a wide range of industries?

That’s right. It’s not just film, or games, or interactive media. You have to look at the range of applications for these skills. Within interactive media, sound and haptic response go hand in hand, and again, that’s going to be the Sound Designer’s job. But these are core skill sets we want to equip students with, breaking down the skills you might need to work in broadcast, podcasts, online radio streams…

Traditional education as a Sound Engineer will only get you so far. To succeed now you need to be a jack of all trades. I wouldn’t want a single Sound Arts graduate to leave without also being skilled at sound recording. I’ve worked on art projects before, such as recording a brass band in a disused quarry by the sea, that required me to be a really flexible practitioner.

These are the skills we’re going to teach in BA (Hons) Sound Arts. By the time you graduate, you’ll bring your expertise to a project, knowing that you can tackle and resolve any problem creatively to get the best outcome. You won’t be limited by technical aspects or the software or instruments that you can buy off the shelf. As a BA (Hons) Sound Arts graduate, you’ll drive the creation of new technology to help to achieve your vision, not the other way round.

Neil Rose is a sonic artist and academic who specialises in electroacoustic/acousmatic music, live performance, film, animation and design. He undertakes frequent collaborations with film and performance/live artists as well as being a successful recording artist, publishing on One C, Café Concrete and Prima Rosa records, and has had work internationally distributed and reviewed by The Wire magazine.

Find out more about exploring experimental instruments with BA (Hons) Sound Arts or get in touch with Neil to discuss the new course directly.

Visit an Open Day to get a feel for life at Plymouth College of Art and take the next step towards your creative future.