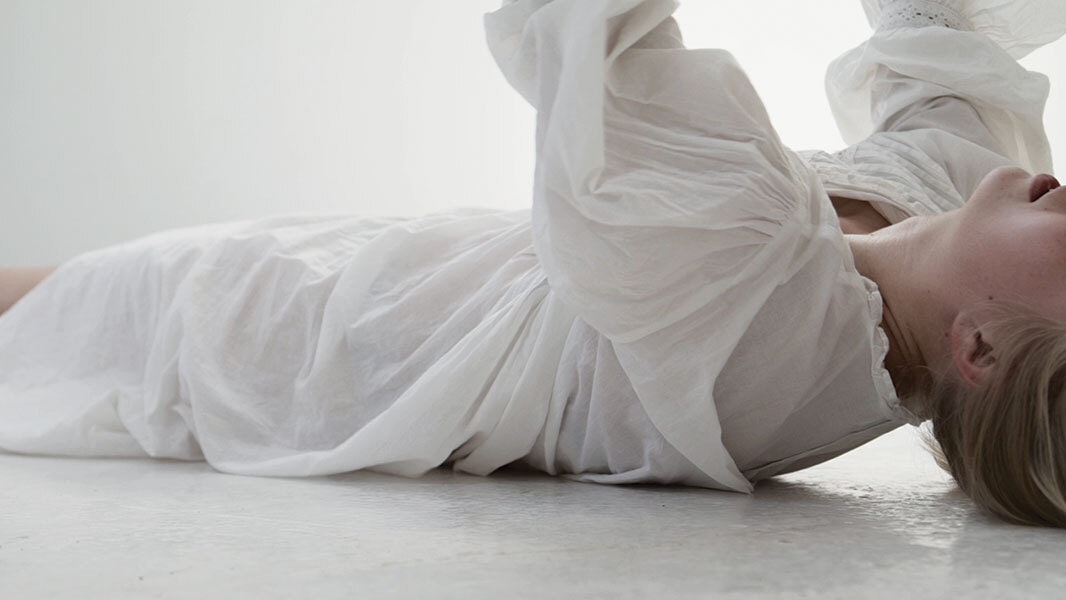 ‘A Cake of Painted Tin’, an installation of moving image and sound works, translates the experiences of British writer Antonia White (1899 – 1980) into the bodies, voices and gestures of the exhibition’s women collaborators, creating echoes across the almost 100 years since Antonia’s incarceration at Bethlem Hospital.

The Arts Council England funded exhibition explores ‘The Frost in May’ quartet of semi-autobiographical novels, which describe the experiences of author Antonia White’s early life and young adulthood, during which she spent time in Bethlem Hospital for a psychosis in late 1922.

Artist Katy Richardson first read the ‘Frost in May’ novels at the age of 13, revisiting them repeatedly. A recent re-reading coincided with a period of Eye Movement Desensitisation and Reprocessing (EMDR) therapy, during which she noticed a shared difficulty in forming functional relationships with other women. Katy sought to rectify this through collaborating with a group of female artists and practitioners, honouring Antonia White’s lived experience in the process.

Plymouth College of Art alumni Naomi Girdler and Amber Amare, as well as Learning Development Manager for the college, Rachel Gippetti, contributed to the installation as part of a team of 13 other female practitioners working across the mediums of art, dance, photography, sound engineering, vocal and physical performance, poetry, filmmaking and psychotherapy.

Amber Amare studied BA (Hons) Film at the college, graduating in 2017 with First Class Honours. Since graduating, Amber has been commissioned by companies such as Google, Tate Modern and New Look as well as being shortlisted and winning awards for her directorial projects at Aesthetica Film Festival, Darkroom Film Festival and London Sci-Fi Film Festival, and regularly collaborating with local groups, artists and institutions including Imperfect Orchestra, Rebel Film Festival, Plymouth Pavilions and Plymouth College of Art. Amber’s experience and skills within cinematography and art direction helped Katy build the visual elements of the immersive exhibition, in her role as Director of Photography.

Naomi Girdler graduated from Plymouth College of Art in 2013 after studying BA (Hons) Graphic Communication. Since graduating, Naomi has collaborated within the creative community in the city, playing bass and singing in local bands Worried Shoes, Caracals and Aches, while working in publishing, eventually returning to the college in 2019 to work in press and communications. Naomi’s expertise in music and sound design led to her contribution for the project, an immersive soundwork comprising female voices, breath and physical sounds, with no instrumentation involved.

Naomi said, “Creating the score for ‘A Cake of Painted Tin’ was a life-changing experience for me. Being able to channel years and generations of trauma, oppression, mental health struggles and psychosis into vocalisations and sounds was an incredible cathartic and healing experience.”

“My paternal grandmother was hospitalized with mental illness in the 1960’s at Fair Mile Hospital in Berkshire, and despite the 40 year difference between Antonia White’s incarceration and my grandmother’s, I know that they would have experienced something very similar. Being able to channel my grandmother’s lived experience and my own encounters with mental health felt very validating and working with Katy has been inspiring and affirming in so many ways.”

At least I didn’t have my baby | in a mental hospital | I chipped my tooth | on the thin lip of a pint | glass, not the wet tile | floor of a mental hospital washroom | in the 1920s
An excerpt from Rachel Gippetti’s poem, ‘Changing the Subject to Antonia White’

Rachel Gippetti, Learning Development Manager at Plymouth College of Art also contributed to the project. Rachel, who’s worked at the college for over six years, is also a writer whose work has appeared in publications in the UK and USA. Her debut poetry chapbook ‘Birthright’ was published by Eyewear Publishing in 2016 and she is featured in the anthology ‘Called to the Edge’, published by Crafty Little Press in 2019. Rachel is also the author of several children’s books and from 2013 to 2017, she ran the literary event ‘Lit’, an open mic for poetry, prose and performance with featured guest readers and performers as well as visual artists. Rachel provided a creative literary response to Katy’s project with her poem, ‘Changing the Subject to Antonia White’.

Rachel said, “Katy's invitation to be part of ‘A Cake of Painted Tin’ came while I was on maternity leave in the depths of one COVID lockdown or another. Our conversations and experimentations acted as small, vital portals into a space/place where I could reconnect with my identity outside of the immediate needs of motherhood and engage with my love for and curiosity around writing, language and human experience. We didn't overthink our collaboration and it felt like being seated at a table in the middle of a desert, with plate after plate of delicious and unexpected cuisine being brought to me. It was a very welcome and nourishing experience.”

On November 18, Plymouth Arts Cinema will host Katy, alongside contributors, alumni and curator Lucy Rollins to present the moving image and sound work of the exhibition. As well as a panel discussion, the audience will also get the opportunity to ask questions.

Katy, Lucy Rollins and the collaborators of the project will also be hosting a virtual panel discussion via Zoom, on Thursday December 2, from 7pm until 8pm. Book your ticket via Eventbrite.

See the exhibition ‘A Cake of Painted Tin’ until November 27 at Studio KIND in Braunton, North Devon, open Wednesday to Saturday 12.30pm until 5.30pm.