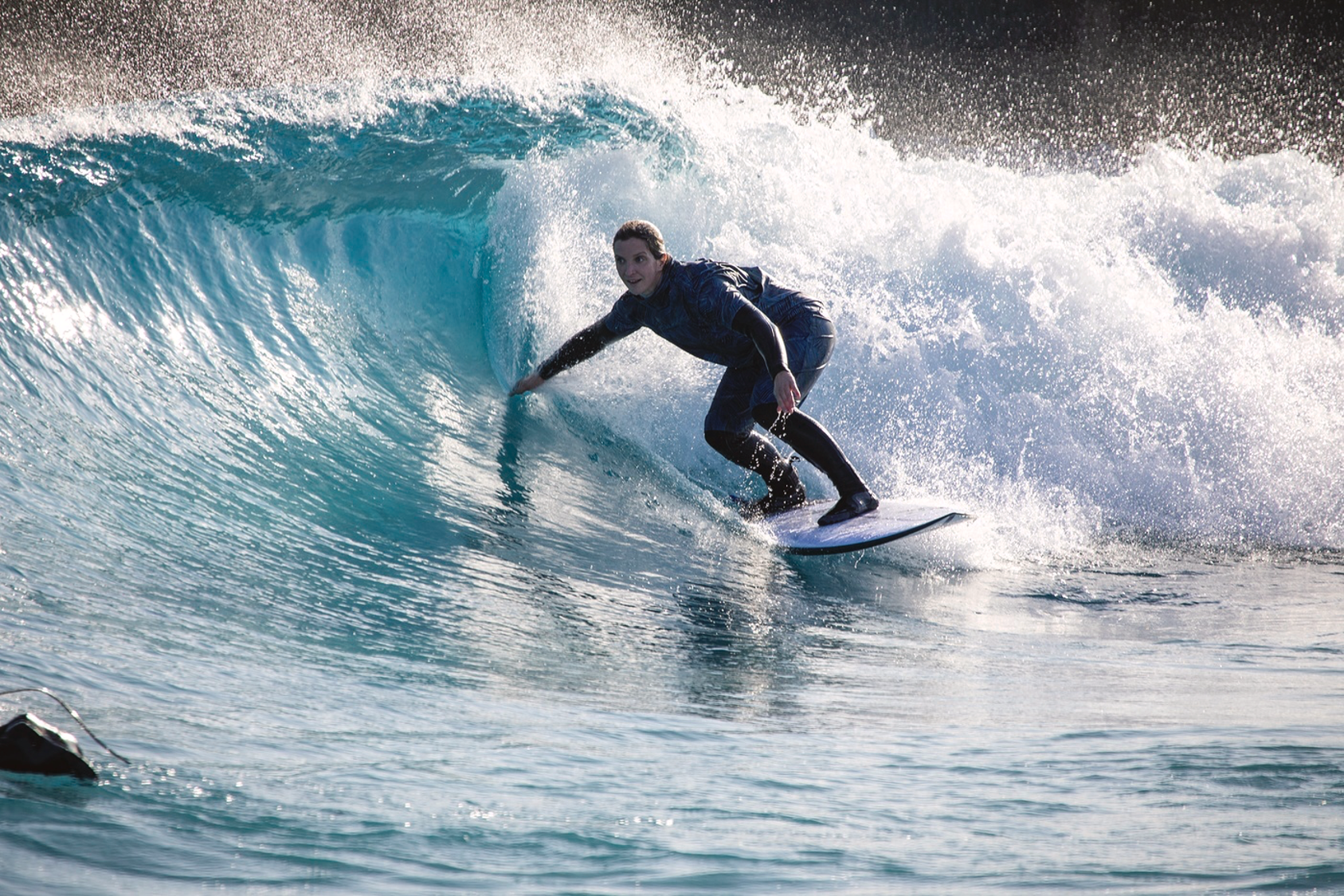 Tuesday, 13 April, 2021 — Textiles graduate Ayesha King, along with Makers HQ, have collaborated with the surfwear brand Finisterre to develop a wetsuit suitable for Muslim women.

The idea was the brainchild of Dr. Easkey Britton Ph.D, an Irish surfer, who when she isn’t surfing the waves and competing in championships across the world, works as a marine social scientist at the National University of Ireland Galway. It was when she became the first woman to surf in Iran, in Baluchestan back in 2010, that she realised that the local culture meant changing what she wore in the water.

Easkey would wear leggings, board shorts, a baggy t-shirt and a hijab - all just to ride a few waves while trying not to overheat. She knew that in order to provide greater access to the sea for local women, proper surfwear would first have to be more accessible. While sports in Iran are generally open to women, they are required to have their bodies fully covered and their hair hidden. The lack of sportswear suitable for Muslim women in watersports was what inspired Easkey into action.

Easkey Britton in the Finisterre Seasuit

Working as a Finisterre ambassador, Easkey brought the idea to the apparel brand and enlisted the help of Iran’s first female triathlete Shirin Gerami to outline cultural and functional requirements. Finisterre designer Rachel Preston then developed the first working prototype, featuring a pattern print designed by Ayesha King, who submitted her design during her time at the college, after a call out for designs to art students studying across the South West.

Inspired by the power and movement of the water, Ayesha said, “I love the way that the sea leaves linear impressions on the sand, displaying the relationship of the land and the sea. The sea is a way of connecting people from all backgrounds and beliefs, and the flowing lines in this print captures that idea.”

Ayesha King at her Degree Show

“The main goal of the print was to mask the shape of the body through print in order to make surfing much more inclusive for different religions or personal preferences. Colour played an important part with the flicks of mustard yellow representing the light flickering on the ocean ripples. These techniques helped to distort and take the focus away from the contours of the body.”

The result, featuring Ayesha’s design, is the Finisterre Seasuit. Fashioned as a calf-length surf tunic, it features an internal cross-back strap system, which allows a woman to step into the garment and pull it on over her wetsuit or leggings. It also boasts an elasticated hood with bungee adjustment designed to stay put in the water. With traditional wetsuits being form-fitting to the body, the suit aids in body confidence, as well as for women who may prefer modesty or are sensitive to the sun and need a full coverage suit.

After two years of design, development and testing, the final tester Seasuit was built at Makers HQ. With a focus on sustainable fashion and eco-friendly solutions, the community interest company aligns itself with the values of Finisterre, as the suit is made from quick-dry, UPF 50+ Econyl recycled fabric. The final prototypes were tested by Easkey and Shirin, and a number of suits have been sent to various communities of women across the Middle East and Asia for further assessment.

"I’m grateful to be part of this meaningful project, and was so excited for my print to be selected. The opportunities of commercial live briefs at Plymouth College of Art are amazing and I can’t thank the Textile Design team and the Digital Print Bureau enough! The college’s facilities and mentoring from staff made this project come to life and allowed me to gain valuable industry experience."
Ayesha King, graduate of BA (Hons) Textile Design

While the surf brand originally planned to use the 2020 Olympics to promote and test the wetsuit as a global means of access to the ocean, the event’s cancellation and the current pandemic have momentarily halted the project. However, Finisterre anticipates that the Seasuit design will be finalized and made available for purchase later this year.

Ayesha said, “I’m grateful to be part of this meaningful project, and was so excited for my print to be selected. The opportunities of commercial live briefs at Plymouth College of Art are amazing and I can’t thank the Textile Design team and the Digital Print Bureau enough! The college’s facilities and mentoring from staff made this project come to life and allowed me to gain valuable industry experience. As a result, I’ve spotted my work on various media outlets including the BBC, The Times, The Inertia, Surfer.com and the Finisterre website, which has been a dream come true! I’m excited to see how the project develops further and revolutionises surf apparel around the world!”

Incorporating cultural and social contexts of textile practice is fundamental to the BA (Hons) Textile Design course, with first-hand opportunities such as real-world experience working with prestigious designers and makers, study trips overseas and sponsored industrial projects with brands and studios. If you’d like to find out more information about applying for this course, check out the How to Apply page.

You can see more of Ayesha’s work on Instagram, and keep up to date with the Seasuit on the Finisterre website.