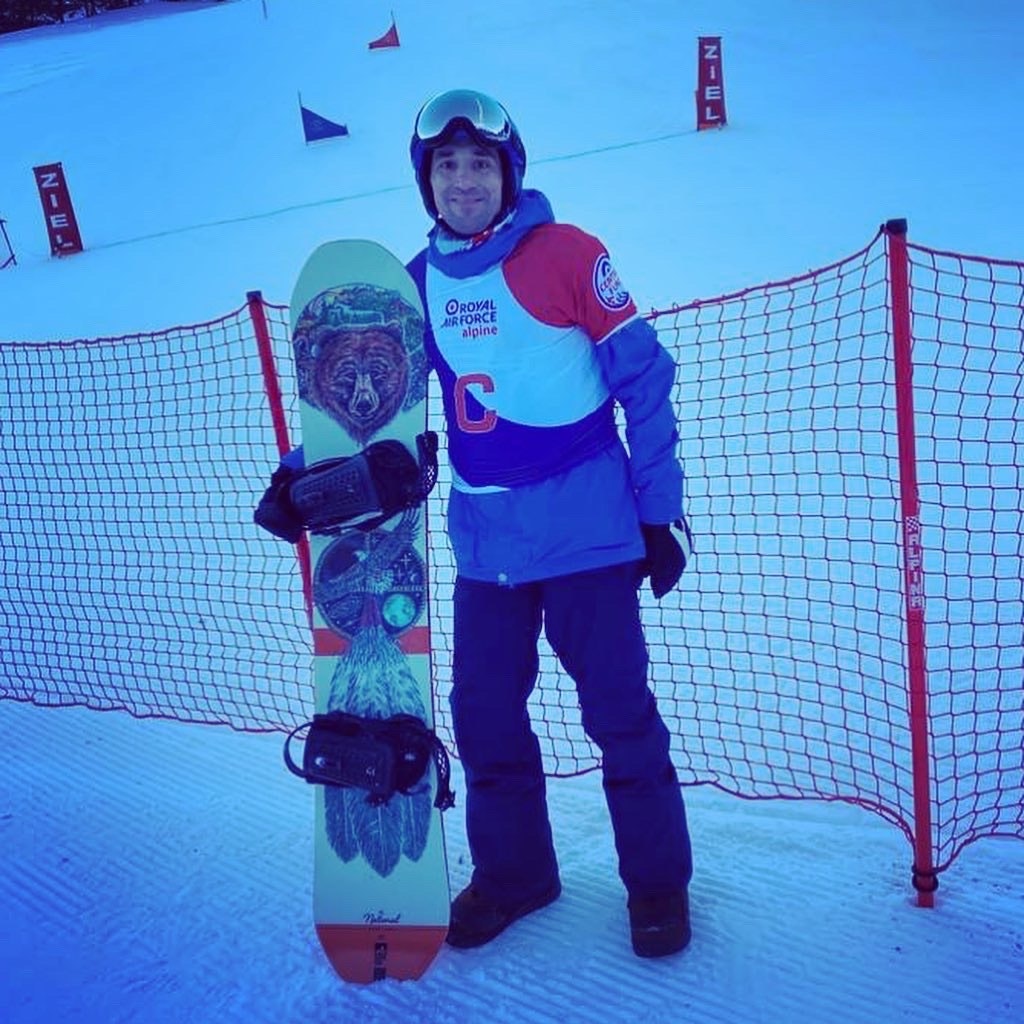 Wednesday, 30 March, 2022 — After medical discharge from the Royal Navy, this veteran is building a new life as a photographer

Ian, who lives in Taunton and was diagnosed with lymphoma in 2016 after 14 years of service as a medic in the Royal Navy, joined Plymouth College of Art in September 2021 as a mature student to retrain as a photographer.

A keen snowboarder whose health issues have stopped him from training for the sport competitively, Ian intends to use his talents on the slopes to help capture and publicise the rehabilitation of other military personnel and veterans. He hopes, through his photography, both to support the inspiring work of the AFPST charity and to demonstrate the value of the arts to other veterans after leaving the military.

“When I joined the military twenty years ago,” Ian said, “I had no idea that it would become such a big part of my life. I joined the Royal Navy and became a medic, which gave me a really interesting and varied career. I worked with Search and Rescue, 771 SQN, did augmented medical covers, assigned to Derriford Hospital, and I was posted to the Falklands and deployed to Afghanistan twice.

“I even met my wife when she was acting as a medic in the forces and we married in 2006. A few years later I started taking an interest in photography, which I developed further by taking a Short Course at Plymouth College of Art in 2009. We started a family together and things were going well. I was keeping in shape and although I wasn’t a super athlete, I enjoyed things like cricket regularly and I’d happily go on a 70 mile bike ride. I love snowsports, so I was trying to earn a spot on the Navy snowboarding team.

“But then I became unwell and was diagnosed with lymphoma. It came at a time when I was ready to move onto the next step of my career, but everything just stalled. In my case the doctors hoped that my lymphoma could be managed and initially they thought we’d have some time for treatment, to stop things from developing. We planned a treatment regime that would have allowed me to get back to work, but things went bad really quickly and my health deteriorated much faster than expected.

“I had some bad reactions to the treatment plan but then things levelled out for a while. In 2018 somebody suggested that I should get in touch with AFPST, because I love snowsports and they exist to facilitate the rehabilitation of military personnel and veterans through snowsports. I went away with them snowboarding, and we had a great trip, but when I returned my health deteriorated again and I had to have a stem cell transplant. The treatments that I needed meant that my illness was incompatible with life in the military.

“12 months ago I was medically discharged and it was time to plan my future. I’d spent my entire adult life in the military and there are limitations around what sort of work I can complete, but after my positive experiences at Plymouth College of Art, it was the only place I wanted to return to. I live in Somerset, but I knew the commute would be worth it.

“Now I’m studying Photography full time. I’ve reconnected with AFPST and recently attended one of their indoor training sessions, not with a view to competing as a snowboarder but to photograph the event and support their work. As a result, I was invited to Colorado to document their next event. I’m in clinical remission right now, but I’ve still suffered a lot of nerve damage and ongoing fatigue that would limit my ability to take part in sports competitively. However, my background as a snowboarder means that I should be able to keep up with the other athletes and capture some of their achievements, supporting the work of this amazing charity.

“When I decided to study at Plymouth College of Art again, I worried that I’d struggle with the transition. I almost didn’t show up on my first day, but from day one all of the staff have been incredibly supportive, particularly Helen Markes. When you leave the military, you lose a big part of your life, but Plymouth College of Art has given me a new lease of life and is helping me to move on. Every day is a challenge and I couldn’t enjoy it more.”

Senior Lecturer and Extended BA Programme Leader Helen Markes said: “Ian’s positive approach to life and his ability to overcome difficulties reflects a fantastic strength of character. His creativity and talent is clear to see and we couldn’t ask to work with a more rewarding student. I’ve been thrilled to hear about his collaborations with the Armed Forces Para-Snowsport Team and can’t wait to see what else he accomplishes during his time with us and beyond.”

The Extended BA (Hons) pathway at Plymouth College of Art is designed for people who want to pursue a creative degree but feel like they don’t yet have the experience and range of skills necessary to succeed at university. This four-year route offers an exploratory first year, for students to develop their insight into a range of art, design and media skills and approaches, before progressing onto a specialist undergraduate degree.