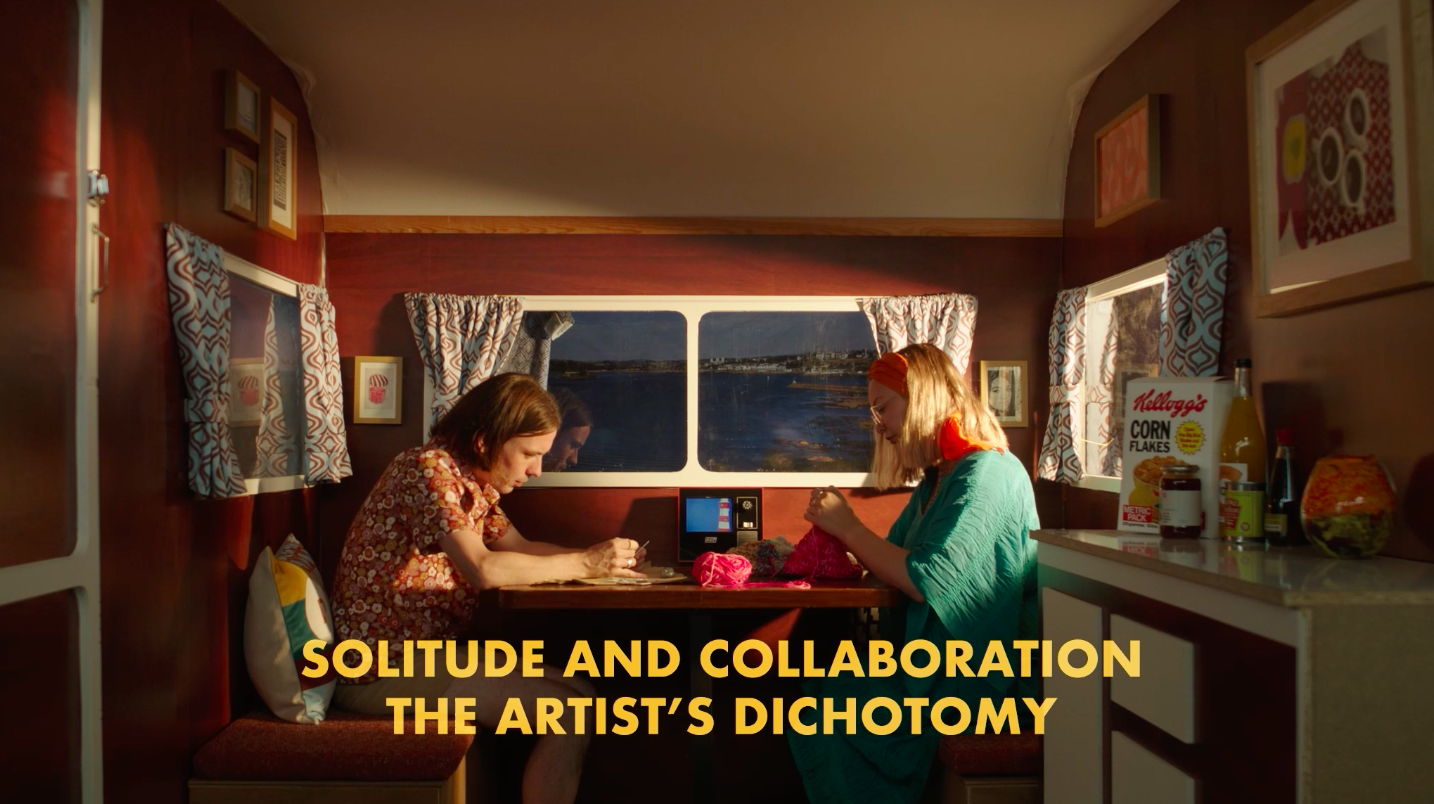 Staff at Arts University Plymouth showcase the magic of collaboration

Thursday, 10 November, 2022 — Technical Demonstrators have created a film to showcase the potential for students in Plymouth’s arts university

Expert Technical Demonstrators from across Arts University Plymouth have come together outside of their teaching time to create ‘Solitude and Collaboration: The Artist Dichotomy’, a short film set in a handmade 1970s caravan and an accompanying making-of documentary, to showcase some of the breadth and depth of technical skill, expertise, equipment and resources on offer in the UK’s newest arts university to students and the city of Plymouth.

Solitude and Collaboration: The Artist Dichotomy

‘Solitude and Collaboration’ was created by Technical Demonstrators and Workshop Coordinators from different specialisms across the arts university, including Harrison Newman, Kathryn Hays, Matt Holmes, Aaron Prout, Pip Murphy, Kerry Brosnan, Sophie Minshall, Fiona Lloyd, Beth De Tisi, Lisa Roberts, Neil Jones, Russell Cleave, Amber Thorpe, Sarah Court, May Watts, Tracey Ormston, India Ritchie, Ben Mundy, Norman Buchan and Oliver Curtis. Most academics and technical support staff at Arts University Plymouth are practising artists in their own right and live in and around the city. The film was also created with help from a wide range of other teaching and support staff from the university.

The short film, which takes inspiration from the works of Wes Anderson and 1970s period nostalgia, is set within a caravan on Plymouth Hoe that was constructed from scratch within the 3D Wood and Plastics Workshop and filmed in the university’s Media and Photography Studios. Almost everything seen on camera within the film was designed, built, created and made using the skills of Arts University Plymouth’s technical teams, showcasing some of the breadth of their knowledge and acting as a calling card for the unique spirit of collaboration and diverse range of technical expertise and cutting-edge resources that are available for students to learn from within the UK’s newest arts university.

Russell Cleave, Technical Demonstrator within Arts University Plymouth’s Multimedia Lab, worked as Director of Photography on the short film and was instrumental in bringing together members of Arts University Plymouth who don’t often find opportunities to work closely together. Russell is a light and sound practitioner and award-winning filmmaker who has directed numerous music videos premiered in mainstream and independent music publications, including Kerrang!, Metal Hammer, The Independent, The Guardian and Vevo. He is also an Arts University Plymouth BA (Hons) Film alumni.

Russell said: “The making of ‘Solitude and Collaboration’ was an experience that epitomises the ethos of cross-collaboration that makes working together in Arts University Plymouth’s main city-centre campus so vibrant and inspiring. At the end of 2021 I began speaking to colleagues about the idea of finding a project that would bring all the technicians from across the university together and make the most of the huge range of skills that we regularly share with students. Due to teaching timetables we don’t regularly have the chance for staff members to work collaboratively across our different disciplines. Creating this film was a real opportunity for us to get to know each other better.”

From the largest structure featured in the film, the caravan shell which was handmade by Wood and Plastics Workshop Coordinator Harrison Newman, right down to the smallest structure, the model aircraft being constructed by the male actor which was made using the laser cutter in Fab Lab Plymouth by Technical Demonstrator Matt Holmes, almost everything that appears on screen was made using the equipment and resources in Arts University Plymouth.

Large format photographs of Plymouth and the iconic Hoe taken by Technical Demonstrator Pip Murphy can be seen through the windows of the caravan set that was created for the film.

Pip said: “As soon as the idea of creating a 1970s caravan came up, everyone was really enthusiastic. It’s tacky fun, with a very distinct style. I did my research and took a day to find spots around Plymouth that would work.”

Behind the scenes - Photo by Ray Goodwin

Discussing the background photos and how they were lit for the film, Russell Cleave said: “The direction of light in Pip’s photos had to be replicated in the direction of lighting coming from the studio lights. We want students at Arts University Plymouth to be able to learn from the work that we put into making the film, so it was important to plan and realise the project in the same way that we would if it were a professional production.”

Vinyl walls and ceilings, lino floor, food packaging and photographic backgrounds within the film were all designed and printed by Technical Demonstrator Kerry Brosnan, whose experience of working in the university’s Digital Print Bureau and previously in the Equipment Resource Centre made her indispensable to the project.

Kerry said: “Based on what I’d learned from previous film projects, I made the decision to print the backdrops onto material, which means that they can be repurposed by students for future projects. It all came together so well. As soon as all the lighting came on, it was exactly as we envisioned it.”

Some of the most recognisable aspects that give the caravan its signature 1970s look came from the Sew Lab and Textiles Studios in Arts University Plymouth, where the hand-knitted socks, ruched kaftan worn by the actors, cushion covers and the screen-printing on the patterned fabric used to make the curtains were created.

Sophie Minshall, a Technical Demonstrator in the Fabric Lab, said: “The film gave us a chance to showcase a variety of techniques. We got together with the technical team from BA (Hons) Costume Production to research which technical processes would be the most fitting for each of the textiles. They have an incredible wealth of knowledge when it comes to what styles came into fashion during the era.”

Behind the scenes - Photo by Ray Goodwin

Within the caravan a television plays an original stop-motion animation of Smeaton’s Tower in Plymouth under attack from plasticine sea creatures. The animation was inspired by classic British children’s television such as Morph, the character which first appeared in the late 1970s on programmes with presenter Tony Hart. Everything showing on the television screen was made in Arts University Plymouth by Technical Demonstrator specialising in animation, Aaron Prout.

Multimedia Lab Technical Demonstrator Neil Jones created graphic design, logos and brand identities featured within the film, which were also used in the credits that bookend what was filmed.

Neil said: “We made the small television in the caravan ourselves because we couldn’t source one from the right era. We even gave it an Arts University Plymouth brand identity based on the BBC logo from the period.”

Staff from departments all across Arts University Plymouth also contributed to a behind-the-scenes featurette about the production process, shot and edited by Technical Demonstrator Oliver Curtis and Russell Cleave.

Costumes, props and a range of other work created for the film was exhibited within Arts University Plymouth to inspire students to think about what could be possible in their own work by collaborating outside of their usual subject areas. The project reflects the unique curriculum at Arts University Plymouth, where students embrace cross-disciplinary practice independently as well as in core interdisciplinary units, and acts as an example to students of how important collaboration is in the creative process.