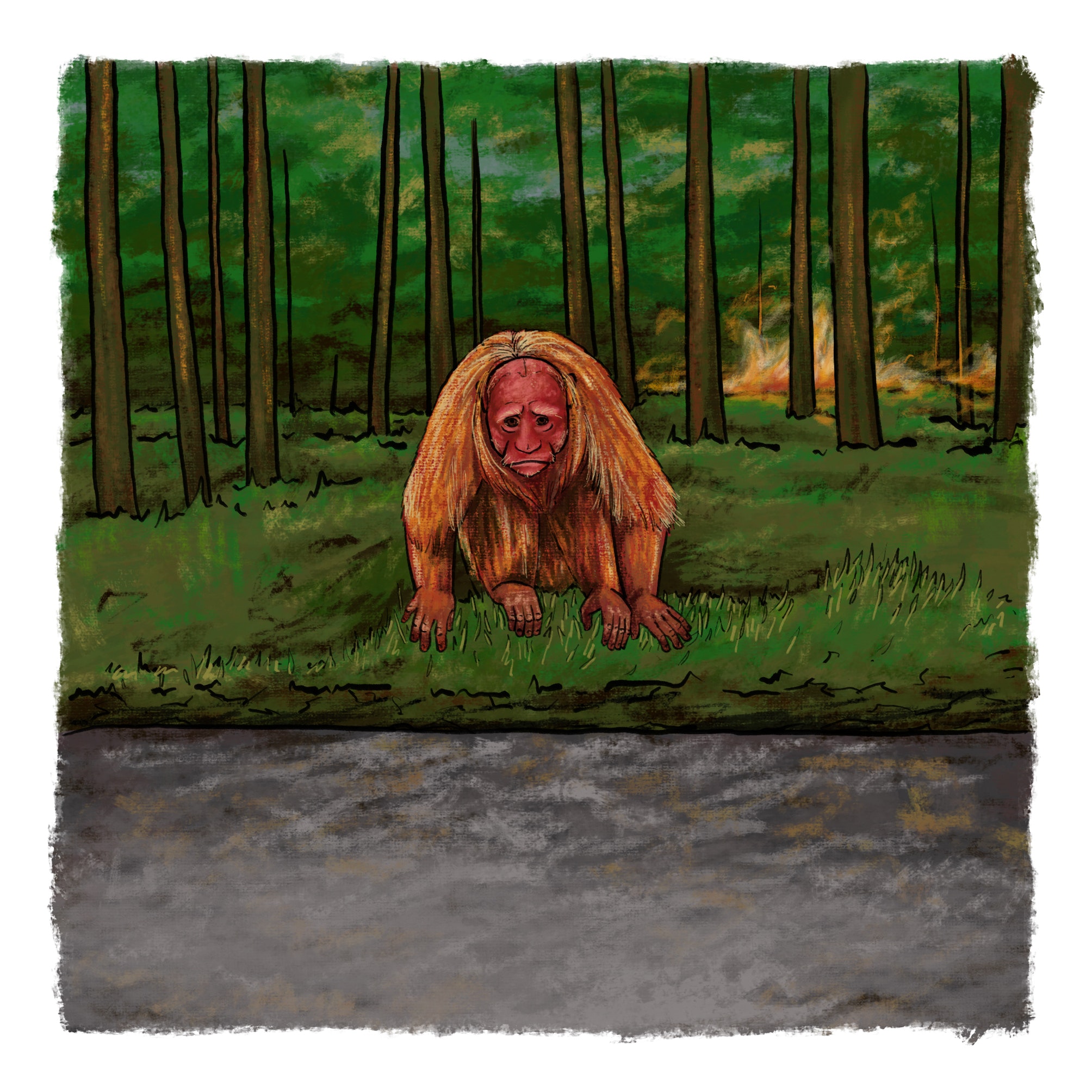 Friday, 29 October, 2021 — Plymouth College of Art alumni Sayra Begum is one of ten comic-book and graphic artists commissioned for digital anthology, Ten Years to Save the World.

Plymouth College of Art alumni Sayra Begum is one of the ten comic-book and graphic artists commissioned as part of Ten Years to Save the World, a British Council supported project that is one of a number of creative commissions in response to climate change and COP26. The project hopes to demonstrate how the comics medium can stimulate climate change action through the creation of a comic digital anthology. Sayra’s strip for the anthology is called ‘A Monkey’s Guide to Deforestation’.

Sayra graduated from BA (Hons) Illustration at Plymouth College of Art in 2014, where she discovered graphic novels in the university library. Sayra credits Craig Thompson’s ‘Blankets’ and Marjane Satrapi’s ‘Persepolis’ as having a significant influence on her creative journey, before going on to complete her Masters in Illustration: Authorial Practice at Falmouth University in 2016. In 2020 Sayra returned to work with students at Plymouth College of Art, discussing how she took a student project and developed it into a published book, as well as revealing strategies that she employed to use personal narrative in her work.

Ten Years to Save the World is a partnership between The Lakes International Comic Art Festival (LICAF, based in the UK) KOMIKET (based in the Philippines) and Creative Concern (a Manchester-based communications agency specialising in sustainability), advised by Dr Chris Jones from the Tyndall Centre for Climate Change Research at the University of Manchester.

The organisers have commissioned ten internationally-recognised comic and graphic artists, five from the Philippines and five from the UK, to represent the diversity and quality of the medium.

The Ten Years to Save the World comic anthology will be a collection of 10 comics, of various lengths and forms, to represent each of the ten years left to save the world and to enable society to tackle different issues and different climate actions. The project will be simultaneously launched in the Philippines and the UK as part of the build-up to COP26.

Sayra said of her work on 10 Years to Save the World: “The organisers at LICAF selected the five UK artists, to bring variety to the project, with different styles as well as approaches. We were given a brief with the conversations the young people had with Creative Concern and then we all went in our different directions.

“And as the monkey states on the last panel, we need to eat less meat as this is a major driver of deforestation, but people don’t usually want to hear this. According to Global Witness, the land used to produce UK imports of commodities associated with deforestation has been shown to take up almost the size of the UK itself. I think this says a lot about our consumption habits.”

Plymouth College of Art is holding an Open Day on Saturday 13 November 2021 for anybody interested in finding out more about studying BA (Hons) Illustration like Sayra or one of the college’s other creative BA (Hons) or Extended BA degrees.

Sayra’s first graphic novel, ‘Mongrel’, was released in August 2020, published by Knockabout comics and supported by Arts Council England. ‘Mongrel’ tells the story of a British Muslim woman who grew up in-between two cultures. She challenges conventions and looks beneath the surface to celebrate differences and reveal the common humanity.

Respected UK comic-book critic Joe Gordon described ‘Mongrel’ as “a beautiful and emotionally honest work”, while Andy Oliver from Broken Frontier said “‘Mongrel’ is an impressive and assured debut work from a new voice with a keen understanding of the singular opportunities and intricacies of comics narrative.”

Ten Years to Save the World - Act now!