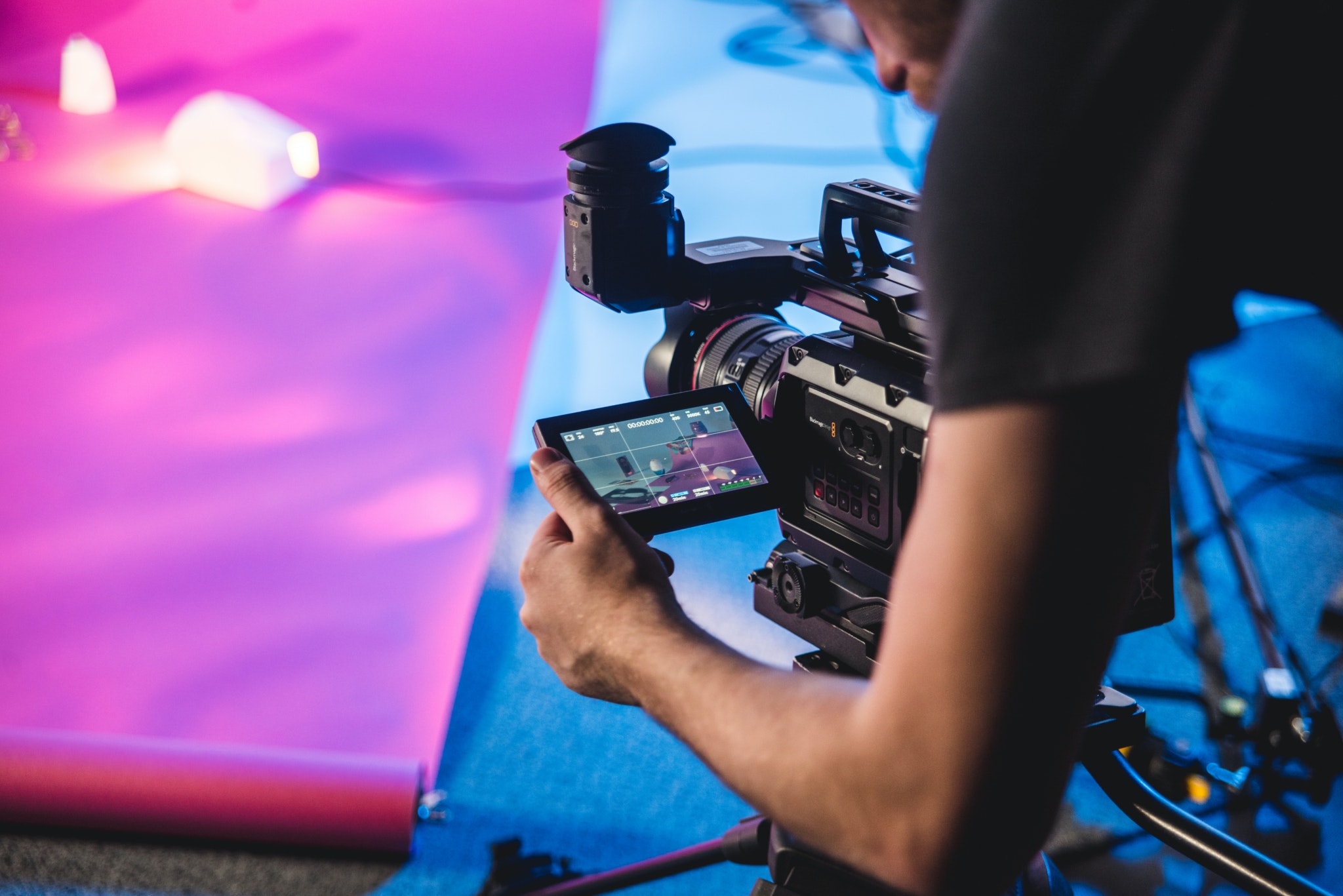 Monday, 21 March, 2022 — ﻿The UK film and TV industry is booming, with productions reaching an ever-increasing global audience and achieving commercial and critical success. The UK is becoming a prime destination for content creators worldwide.

The popularity of streaming services has changed the way we consume and create filmed entertainment with Netflix, Amazon Prime and Apple joining traditional Hollywood studios by making their programmes directly available to viewers. This change has boosted demand for content, leading to more productions choosing to film here in the UK. This means there has never been a better time to start your career in film or television production.

There is now a race on for companies to strike exclusive deals with UK studios, in order to have enough stages to house productions. Facilities are growing to cater for the ever-increasing demand from US streamers and studios.

BA (Hons) Film & Screen Arts Lecturer, Dr Neal Kirk, said: “COVID-19 brought media production to a halt worldwide, so companies not only have a backlog of planned content, their slates are booming for post-COVID markets. With this comes the creation of new jobs and opportunities - all of which is great news for recent graduates, making it an incredibly exciting time for those about to graduate in disciplines like Film & Screen Arts.”

The demand for content has never been greater. The UK is enjoying a once in a generation growth in production.
Adrian Wootton, chief executive of the British Film Commission

Shepperton Studios, owned by Pinewood Group, recently announced new expansion plans. The development will see space increase to approximately 1-million square feet of new production accommodation, adding 17 new sound stages to its existing 14, which are predicted to be up and running in 2023. There has been a £1-billion enlargement of facilities at Pinewood since 2001 and they have recently renewed their long term deal with Netflix, who shoot shows like The Witcher and The Crown in the UK.

Anna Mallett, Vice President Physical Production UK & EMEA, Netflix, said: “The new contract with Shepperton highlights our commitment to investing in the UK creative industry and will provide a wealth of opportunities and production jobs, from entry level to heads of department.”

Amazon Prime joined rivals Netflix with a contract at the Surrey studio, after striking a record breaking deal to lease space at Shepperton. Although the finer details remain unknown, it is believed that Amazon’s lease is for well over 10 years, representing a huge vote of confidence for the UK’s £6bn TV and film production industry. It’s the company’s first long-term commitment to making TV programmes and films in the UK, signifying that the race to ensure productions can be filmed without interruption is hotting up. It’s thought that the lease is longer than previous deals struck by Netflix and Disney, both of whom have space at Pinewood Studios, the parent of Shepperton.

There are big contracts up for grabs, with many in the industry having their sights set on Amazon’s Lord Of The Rings series, once it transfers base from its previous shooting home in New Zealand to UK shores. Amazon said that the next two years were expected to be its busiest yet for UK-made productions. “We’re proud that (Shepperton) will be home to many Amazon Prime Video productions in the years to come,” said Jennifer Salke, head of Amazon Studios.

Our graduates gain the skills to walk straight onto these sets as sound technicians, grips, camera operators, art department, writers, editors, and any number of roles in between.”
Dr Neal Kirk, Film and Screen Arts Lecturer

Not to be outdone, Batman-maker Warner Bros and Universal, home to the Fast & Furious franchise, have their own facilities at Leavesden near Watford. The film production company is putting together proposals for new sound stages, workshops, offices and external film production areas.

Warner Bros said: “We have an exciting vision for the future expansion of the studio, designed to meet the increasing demand for our facilities and to bring more skilled jobs and opportunities to the local area.” Since it opened in 2012, the studios have continued to extend their existing lots, which include 19 sound stages, two water tanks and additional services such as lighting and rigging departments, and post-production sound and picture services.

There is also Sky, broadening its amenities by launching Sky Studios Elstree in north London, which opened its first phase recently. The new studios will become home to a host of original productions, as well as major film offerings from Universal Pictures and Working Title, and television series from Universal Studio Group. Caroline Cooper, Chief Financial Officer is predicting they “will be going live with dozens of new jobs over the coming months” as the recruitment drive kicks-off. To ensure that diversity is represented they aim to recruit 20% of employees from black, Asian or minority ethnic backgrounds by 2025.

Smaller studios are also benefiting from soaring investment over the past three years, with over £785m earmarked to be spent on new sites. Shinfield Studios in Berkshire has already constructed four sound stages with a further nine due to open in 2023. Completion of the entire 18-stage facility is set to finish by the end of 2024 and will include workshops, a post-production/screening facility with spaces for lighting, camera, costume workshops and props businesses. Disney have already signed up to use it as the shooting base for a new production this year

The roll call of new plans continues with a totally new studio complex, Dagenham Studios, being greenlighted in East London. Projected to become the biggest film studio in London and creating 1,200 jobs, it will include six sound stages alongside purpose-built post-production offices. Further east, Newtown Rail Works in Ashford will be transformed into Ashford International Film Studios with 4 dedicated stages to film production. Moving northwards to Liverpool, the Littlewoods Pool building has stood empty since 2003. Twickenham Studios have now announced plans for redeveloping it as Littlewoods Film Studios. Across the Irish Sea, Belfast Harbour Studios are eyeing up a £45m expansion that includes an additional 6 stages. If plans are approved by the local authorities it is set to become the largest studio outside of the South East of England. We can’t forget the South West of course, Hengrove’s Bottle Yard Studios in Bristol is expanding into a neighbouring industrial site as part of a £12m redevelopment that will add three new stages. The expansion will increase the number of stages on offer at the council-owned facility from eight to 11.

The new contract with Shepperton highlights our commitment to investing in the UK creative industry and will provide a wealth of opportunities and production jobs, from entry level to heads of department.
Anna Mallett, Vice President Physical Production UK & EMEA, Netflix

Dr Neal Kirk says the units specifically designed for our BA (Hons) Film & Screen Arts programme, equip students with the skills studios look for. “We give students a chance to gain in-demand film production skills and the unique opportunity to create a film in a studio space that deliberately emulates these major and expanding studios - right down to the professional grade Arri Alexa cinema camera and lights. In short, our graduates gain the skills to walk straight onto these sets as sound technicians, grips, camera operators, art department, writers, editors, and any number of roles in between.”

It’s a dizzying array of prospects, ripe for the taking, with opportunities for employment across a choice of UK locations. The production industry moved into turbo drive last year as broadcasters and streaming platforms scrambled to replenish their content, depleted by COVID binge-watching and delayed shooting schedules. All of which is great news for anyone searching for jobs within the industry. Inspiration can be taken from former students, like Foundation Diploma in Art & Design and BA (Hons) alumnus Henry South, now working for Industrial Light & Magic as a Texture Artist, on some of the biggest movies in Hollywood.

“The demand for content has never been greater,” said Adrian Wootton, chief executive of the British Film Commission. “The UK is enjoying a once in a generation growth in production.”