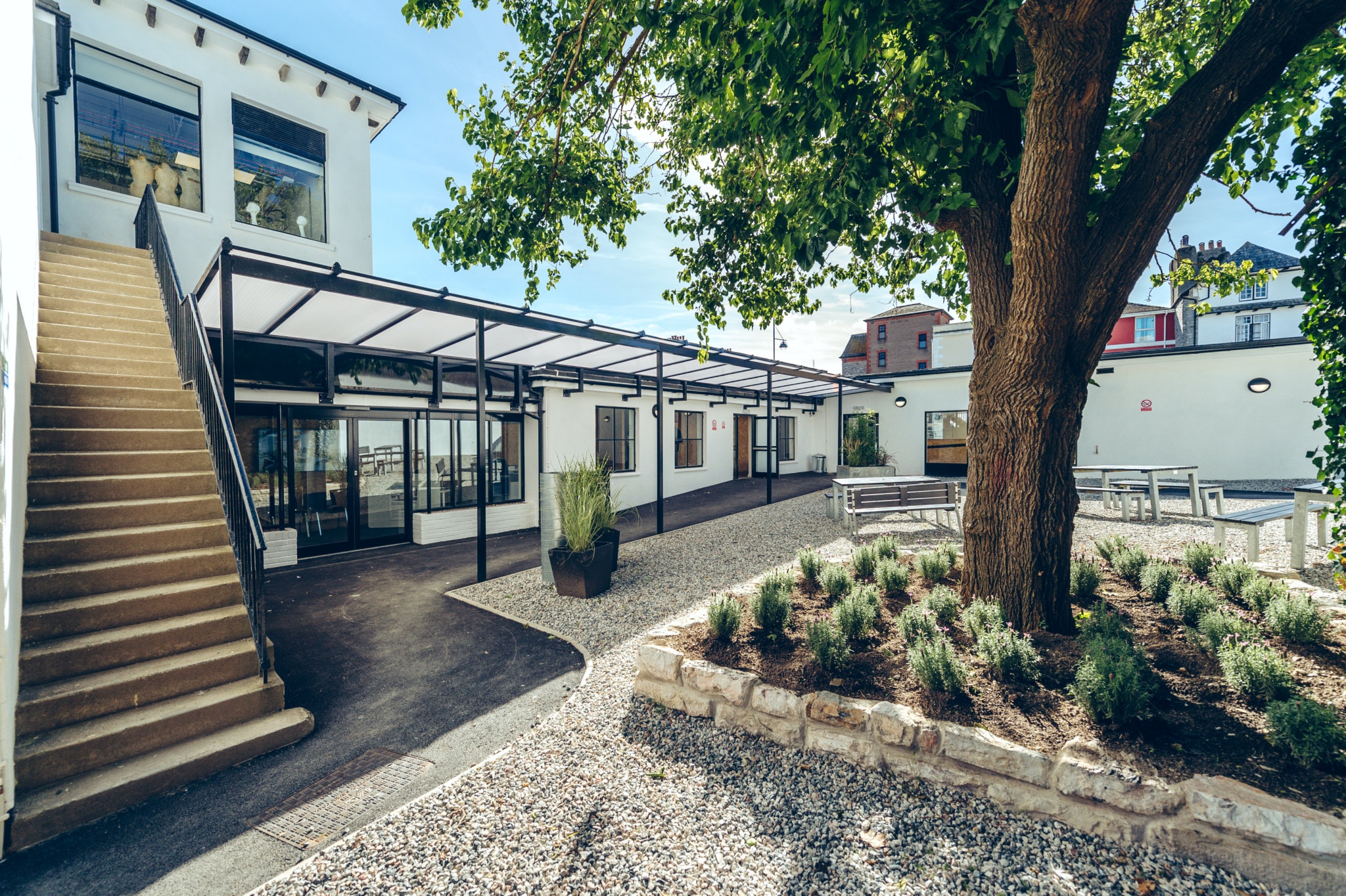 Wednesday, 11 August, 2021 — Extended Diploma and Foundation Diploma students from our Pre-Degree campus celebrated this week as they received record results, with over half achieving a Distinction, equivalent to 3 A* at A-Level.

Students from Plymouth College of Art’s Palace Court Pre-Degree campus are celebrating this week as they receive the record results of their qualifications, after successfully tackling the challenges posed by continuing their art education during the COVID-19 pandemic.

Summer Phillpott, an 18-year-old UAL Extended Diploma in Graphics, Illustration & Game Arts student from Torpoint, Cornwall, said: “I’ve loved my time studying at Palace Court. The environment is professional, but comfortable, a place where you can get work done surrounded by people with similar interests who all have the desire to improve and get better at the things they love.

"Studying GCSE-level art at my old school before coming to Plymouth College of Art was so different, very strict and with such a small amount of freedom and no digital aspect. I found the transition to having so much more freedom difficult at first, but now I feel ready to go on and study landscapes, environments and backgrounds in video games in much greater depth when I start my BA (Hons) Animation & Games at Plymouth College of Art in September.”

19-year-old Max Davies, from Saltash, who earned a Distinction on the Foundation Diploma in Art & Design, said: “I can’t wait to start my BA (Hons) Fashion Design course next at Plymouth College of Art’s main campus, and then I hope to move onto a work or study placement in Germany. The fashion industry there is so interesting and something that I’d love to experience working in.

“I chose to study a Foundation Diploma in Art & Design at Plymouth College of Art because after studying art at GCSE and A-Level at my local school I didn’t feel ready to study at degree level yet - I wasn’t confident in my own abilities and my portfolio wasn’t ready. Originally I thought I wanted to study illustration or fine art, but within weeks of starting my Foundation Diploma I changed my mind completely and devoted myself to a fashion pathway. I haven’t looked back since, and now I feel like I’m really ready to succeed at university.

“Studying art at school was so structured and prescriptive, telling you what to do and when, ticking boxes, but at Plymouth College of Art you’re encouraged to pursue what interests you and see how far you can push it. At Plymouth College of Art my study never felt like a chore, I was excited every day to come in and throw paint at things, to work in a constructive environment that made me feel like I belong.”

Speaking on results day, Hannah said: “I’m hoping in future to work in video games and films, specifically focusing on character and environment design. I’ve really enjoyed learning new skills and meeting new people at the Pre-Degree campus, particularly the professional side of preparing to work with real-life clients. Next I can’t wait to start my degree in Animation & Games at Plymouth College of Art, which will give me the experience that I need to get started in the industry.”

18-year-old Mimi Jones, who studied Level 3 Extended Diploma in Film, Animation & Media Production, and who was originally from Gosport but now lives in Plymstock, said: “I’m really happy to have achieved a Distinction. I’ve learned so much at Plymouth College of Art, including having the opportunity to act in the role of Vice President for Further Education as a Student Representative, where I regularly represented the needs of Pre-Degree students to senior leaders across the College.

“I’m planning to move into a career of freelance writing and art next, with the long term goal of acting as a showrunner and writer of an animated television show, writing screenplays and journalism along the way. Before joining Plymouth College of Art I first looked at film and english language A-Level options, but local schools couldn’t offer the same creative space that’s on offer here. Rather than being restricted to something like film analysis at school, in Palace Court I was able to draw one day, write analysis the next and record a film another.”

The specialist creative Level 3 Extended Diplomas delivered by Plymouth College of Art are designed and awarded by UAL Awarding Body, which is part of the University of the Arts London (UAL).

Designed in collaboration with industry and education partners, the qualifications, which are equivalent to A-Levels for 16 to 19-year-olds, are recognised by UCAS, Plymouth College of Art and other arts universities throughout the UK, and by employers in the creative industries.

Last month students in Palace Court celebrated the first year of graduating results from Plymouth College of Art’s new International Baccalaureate Career-related Programme (IBCP), which launched in September 2019. All students who had taken the IBCP students achieved the qualification, which comprises 2 Diploma Subjects as well as a 3000-word academic research project on an ethical dilemma rooted within the student’s Extended Diploma course. The IBCP students were also required to undertake a minimum of 50 hours learning Japanese and engaging with Japanese culture, and 50 hours of Service Learning, involving conducting voluntary work. All aspects of the programme are underpinned by an explicit focus on Personal and Professional Skills, enabling each student to develop vital skills in communication, critical thinking, collaboration, cultural engagement, and well-being.

Plymouth College of Art’s students collectively managed to achieve above the IB average in their Diploma subjects, with 37.5% of students achieved the highest possible grades (6/7), which are equivalent to A/A+ at AS Level.

Lauren Pemberton, who studied IB English Literature, IB Psychology and a Level 3 Extended Diploma in Art & Design, said: “Since coming to Plymouth College of Art instead of staying at Sixth Form at my old school, I feel like I really fit in. You’re allowed to be your own person here, with your own individual style, whereas school felt restrictive. I’m really pleased with my results and am going on to study BA (Hons) Illustration here at Plymouth College of Art.”

Robyn De Jager, who studied IB Environmental Science and Systems, IB Psychology, and a Level 3 Extended Diploma in Art & Design, said: “I am very surprised at my results, but pleased! I’m now planning to go to Bath Spa to study Fine Art. Studying at Plymouth College of Art has been great. I think that like other students who came here after studying at grammar schools, we all found more freedom and had more fun. Compared to friends who stayed on at grammar school for Sixth Form, we’ve felt like we have been treated like adults and have developed better relationships with our teachers here at Plymouth College of Art.”

Michelle Lester, Curriculum Manager for Academic Studies, said: “It’s amazing that our first cohort of students all achieved the IBCP, with some truly excellent results. This group of students have battled through thick and thin and I really couldn't feel more proud of them.”

Neil Rose, a Lecturer at the Pre-Degree campus, said: “Some of the students who completed the IBCP and got Distinctions in their Extended Diplomas are walking away with the equivalent of nearly six A-Levels. These grades, combined with the rest of the core skills that they learned as part of their time with us, will set them up for life, whether that’s university, apprenticeships, or whatever they want to do. The resilience that our students showed to achieve these qualifications at such a high level is incredible, particularly during two years of pandemic.”

If you know a school leaver receiving their GCSE results and looking to specialise in art, design, craft or digital media at Further Education (FE) level, please click here for a full list of Level 2 and 3 courses now recruiting for Autumn 2021.

Extended Diplomas and the International Baccalaureate Career-related Programme (IBCP) prepare young people for success in industry and progression onto a degree at HE level, with many choosing to continue their studies at Plymouth College of Art.